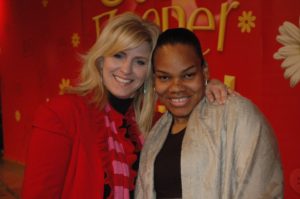 Originally from the beautiful island of Belize, she found herself living in the projects of The Bronx. Her hometown wasn’t full of multimillion dollar homes, but she had a yard and a fence and kids could play outside. Coming to New York, she lived ten floors up in the air with security bars on the windows. The elevators were full with the dirt and the pee. She literally had to escort her little girls to the park. And they couldn’t play beyond a certain time.

The highest risk of raising daughters in The Bronx, besides the influence of drugs and alcohol, is the promiscuous lifestyle. Danet made up her mind that she was going to hold on to Proverbs 22:6 and wasn’t gonna let it go because “my children were not going to be teenage vagabonds.” And that became her mission, but she could not believe what God asked her to do when she began praying that verse out loud.

Before she knew it, Danet was a homeschooling mom.

“I was a black homeschooling mom in the South Bronx,” she reports. “In the projects!!! In a lot of poor family’s minds, homeschooling was for rich white people. There was no support. No one in The Bronx understood what I was doing.”

Alone, but committed, Danet discovered Secret Keeper Girl events and books, and integrated them into her health education. “My daughters were going to be the first Secret Keeper Girls in the Bronx,” she decided.

But when she went online to find a Secret Keeper Girl event to attend with her girls, she discovered that the tour never came to New York City. Danet could not believe it. If there is a tour to help little girls, why is it not coming to New York City?

Danette began to pray that God would somehow provide the money for her and her girls to get to an event.

What God did next is a beautiful miracle.

I, Dannah, was praying one day and asking God what he wanted for Secret Keeper Girl and saw this picture in my head of brick buildings. I sensed immediately that I was seeing the projects of New York City. I was suddenly struck with the fact that Secret Keeper Girl had never been to New York and therefore wasn’t reaching the most at risk girls in our nation. I new NO ONE in New York City. Had no connections. Didn’t even know what part of the city to go to. I reached out and eventually found this large church in Queens that was willing to work with us, but when I prayed again, I didn’t have peace. And then this itty-bitty church in The Bronx said they could help, and it didn’t make any sense. It was so small, but I knew that was the place.

I told the Secret Keeper Girl moms across the nation what God was doing to my heart. That I wanted to do free events in at-risk communities and give books out. Women just kept putting $20 bills in my hand and saying, “I want to help.” We had the funding. We just weren’t sure how to run a marketing campaign in the city without a Christian radio station. How would we get the moms there? So with one week to go, it looked like NO ONE was coming.

Meanwhile, Danet had begun following me on Facebook. I don’t often post my prayers on social media, but I felt so strongly that I should do it. One day I just wrote: “Praying for the little girl’s in The Bronx.”

Danet saw it and wrote to my office. Of course, with the flailing marketing happening in The Bronx, I called her within minutes. We needed help getting the word out. I was really beginning to question whether I had heard from God on this.

Our event was to be just blocks away from Danet’s apartment complex! Is that God hearing the prayers of a mom or what?! And Danet was just the marketing tool me needed to make our first outreach a success. We prayed with so many little girls who’d been abused. So many moms who just didn’t know how to write a different future for their daughters than the one they’d known. Gave them hope.

God hear’s the prayers of a praying mom.

Danet’s fueled me. Since then, we’ve been taking our Secret Keeper Girl tour bus to communities like Danet’s that have higher risks, but lower incomes. We provide FREE tickets and a bag of FREE resources for every mom and daughter that need them.

Will you help us? Upcoming outreach events in the at-risk pockets of Brooklyn, NY, Jarabacoa, Dominican Republic, and Belle Glade, Florida are supported by your generous end-of-year gift.

Written By
Dannah
More from Dannah
Regardless of your New Year’s resolution, we hope you’ll start this new...
Read More