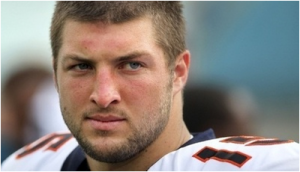 “Have you slept with this man?”

That was one of many national headlines this week. And Tim Tebow’s face was next to the question.

There’s a bounty on him: $1 million for any woman who can provide undeniable proof that she’s had sex with football’s symbol of integrity. No, I’m not making this up. The Twitterati have been abuzz about it all week. Set by a website that matches partners looking to have adulterous affairs—think eHarmony but minus the harmony—it’s really nothing but a cheap publicity stunt. (You won’t find the name of the site here, that’s for sure.) However, it does illuminate the fact that there are those who are just waiting for Tim Tebow to be proven a hypocrite. They wait like vultures, hoping to feast on the decaying carcass of one man’s morality. Case in point: New England Patriot’s tight end jokingly offered to do the job himself. His vulgar offer—seen below—was made in front of an audience of college students, which is what makes it so despicable.

You have to see this—and hear the audience roar in unholy praise—to really understand what’s at stake. There is a battle raging and it’s not just about Tim Tebow’s radical stand for abstinence. (It’s his choice, America! If you believe in “tolerance”, why not act like it. His choice will guarantee him—and all those who follow his example—a life free of sexual transmitted infections, untimely pregnancies, and depression. Why isn’t that a choice worthy of your “tolerance?”)

But I digress. My point is this: Tim Tebow and Rob Gronkowski are both role models. Some players in the NFL deny that they have the power to transform behavior. They say that they’re not role models. To that, Tim Tebow recently said: “Yes, you are. You’re just not a good one.”

Here’s what concerns me most: it seems that some would leave only the role models for moral decay in the playing field of American culture. But I’m a player on that field, too. And I’m making a play today. I might hurt myself using football terminology—my husband and son can attest—, but I’m stepping in to act as offensive lineman for our quarterback of American virtue. It takes more than one, so I hope you might coach yourself up to join me on the playing field. Let’s make a play to block the adulterous match-making websites, night clubs eager to devour one man’s virginity, and fools like Gronkowski. Here’s how the play goes:

1.) Visit the website for the Tim Tebow Foundation.
2.) Send Tim a donation. When you do, you’ll be sending him an ‘atta boy! I’m sure he needs one every now and then just like the rest of us.
3.) Wait for you postcard to come. Bob and I joined the Tim Tebow Foundation recently, and I have the postcard from Tim Tebow on my fridge to prove it. It has a photo of him, is signed by him, and carries with it the power of a scripture verse.
4.) Put your postcard on your fridge and pray for Tim to stand strong and be protected. I pray for him each time I walk by the postcard. And that’s the real play isn’t it?

If you believe that we need role models like Tim Tebow, then they must be protected and supported because they certainly are attacked and assaulted. We do not protect them and support them by doing NOTHING! (That leaves us guilty of putting them on the playing field alone. The results could be bloody.) Equally, the reaction should not be one of hatred for those role models that illuminate modern day paganism. Instead, we can respond with prayer. We can lock our shields of faith together and build protection around Tim Tebow and others like him who display virtue.

And we can pray in faith that they will stand strong. Because at that point there IS a bounty on Tim’s head, but not the one posted as a publicity stunt of a tawdry website. The Apostle Paul once commended the church at Corinth to stand behind Titus who had been sent forth to show things honorable not only in the sight of God, but in the sight of men. Paul labeled the grace on Titus to stand strong in their culture “a bounty which is ministered by us.” The Church of Corinth had Titus’ back.

Do we have Tebow’s?

Written By
Dannah
More from Dannah
I’m not reading Fifty Shades of Grey. I wasn’t planning to announce...
Read More