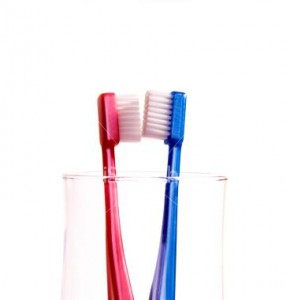 Over half of all marriages today are preceded by sharing a toothbrush cup. That’s right, there’s a lot of living together going on. Most of the girls who put the blonde on my roots each month have lived together. One of my friend’s daughter’s is living with her boyfriend. A girl I’ve been discipling at church is living with her guy. Common as a cuppa Starbucks is the proverbial toothbrush cup.

I hear a lot of reasons why these girls are making the choice. Some just like the closeness. Others like the idea of “trying it out.” One told me it was the only way finances would work. Another actually told me  it was complicated. Hmmm. Mind if I illuminate just how complicated living together can be?

Introducing the brilliant minds of Josh McDowell and my dear friend Erin Davis who recently teamed up to pen “The Bare Facts: 39 Questions Your Parents Hope You Never Ask About SEx”. Here’s what they write about living together:

“Cohabitation rarely leads to ‘happily ever after.’ Forty percent of people who live together break up before marriage. Of those who make it to the altar, cohabiting couples are nearly twice as likely to divorce as those couples who don’t live together before marriage.
Cohabiting couples report problems on several levels. Cohabiting couples frequently have difficulty with communication. Cohabiting couples also struggle with conflict expectations. Men often see living together as a step to see if they want to commit, while a women sees it as a move toward that commitment. Couples choose to co-habit to get a foretaste of what marriage will be like, but the very thing that makes marriage work  is missing. It is that level of commitment that allows couples to weather the trials of life together.”

I’ve studied sex for a few years now, and I’m always pleasantly surprised by the research that continually supports the idea that sex is better inside a mutually monogamous relationship. The security makes it so. Women’s bodies work better. They have sex more often. The contradiction of living together to see if you’re sexually compatible really floors me: statistics say you’re creating an environment that’s not even conducive to the best sex, so why try? You may be missing the best sex by failing to first restrain yourself and then commit in absolute abandon!

Here are a few other perks according to McDowell and Davis:

Not bad perks. If I were you, I’d keep that toothbrush lonely until there were a ring on my finger! I did.

Written By
Dannah
More from Dannah
What would you do? The child you know and love—and was raised...
Read More