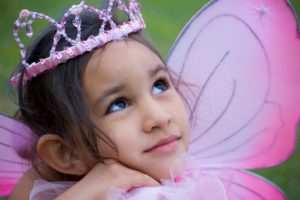 Last week, The Washington Post reported on new research revealing that the “princess culture” is damaging young girls. Is it? (My team has been researching the concept of “princess culture” for about nine months preparing for a new Secret Keeper Girl tour and I might have a different take on things than the many hyped-up headlines.) While modern princesses like Elsa, Merida, and Rapunzel have been applauded for breaking stereotypes, the overriding impact of a slow and steady stream of physically perfect female lead roles awaiting their prince is accused of doing measurable damage. The study, a first measuring social science data on the impact of “princess culture” reveals three specific concerns.

By admission of those who conducted it, the study is rather limited. It analyzed the impact of “princess culture” on 198 preschool and kindergarten girls and boys. Not a huge sampling and five-year-olds don’t seem to be the ones struggling with eating disorders and body image issues. But I think weight is added to the research by the fact that it proves what many of us already suspected: obsession with “princess culture” may lead to problems. These were the three specific concerns discovered by author and researcher Sarah Coyne:

Are these legitimate concerns? A quick glance may have moms packing up their daughter’s dress-up chests in a hurry, but slow down. Count to ten. Culture has presented the concept of princess to our daughter’s with an unhealthy emphasis on beauty and external appearance, but does that mean there is not value in the concept of being a princess? Here are three reasons a proper understanding of what it means to be a princess could be good for our daughters…and our sons. (And the third one is the one that really counts, so don’t miss it.) Coyne’s own research proves my first two points.

First of all, the good news in the study was for boys who tended to respond positively to the princess culture as a counterbalance for all the negative messages boys face in media. The emasculation of our sons and husbands, fathers and brothers has gone on long enough. (Worthy rabbit trail: maybe that’s why we cheered so loudly when Cheerios gave men back some strength when they introduced #HowToDad. Our spirits long for men to be good and to be what God created them to be: leaders.)

Cheerios – How To Dad from Trevor Corrigan on Vimeo.

Second, the research found that girls tended to be more feminine when exposed to feminine culture. Is that really bad? Coyne went on to explain, “there’s nothing inherently wrong with being feminine. But research has shown that adherence to female gender stereotypes can be limiting across time.” I think this clarification is critical. Stereotypes=bad. Femininity=good. The stereotypes and obsession with physical beauty are bad, but behaving like a lady with some manners and concern for those around you is not. If something about princess is causing our girls to act like…well, girls…then I want to learn more, because I think that’s good.

Third, God calls us “princess.” In the long-term narrative of the Bible where God is displayed as our regal King & Jesus as the prince who saves us, we find endless parables of love relationships with God. One is found in Psalm 45, which was a wedding Psalm often sung at Jewish ceremonies. Bible scholars believe it is also a song from God’s heart to ours.

“The King is enthralled by your beauty…all glorious is the princess within her chamber.” Psalm 45:11a, 13a

God’s word speaks to us in parables—human story that give us insight into our spiritual standing. And in those parables we play the role of princess. A true daughter of God, knows that being a princess is just a symbol and not nearly as important as the spiritual reality of our relationship with the King. But we know it’s not unimportant.

The problem with the modern day princess culture is not that we invite girls to be princesses, but that we have limited it to a personality type that loves tutus, tiaras & tea parties instead of instructing them that it’s a position that dictates their value and behavior despite their waist size or interest in the color pink.

PRINCESS IS A POSITION NOT A PERSONALITY.

You can love sports or be in the army. You can get a great education and be a mom. You can have a black belt, or be a ballerina or play soccer or paint pictures. You can volunteer at church and become a grandma. You can be white, black and any shade in between. You can be great at math or love diagraming sentences. You could become president or a vet, a teacher, or lawyer. You can love cooking or hunting. You can always have a new hair style or always have your hair in a pony tail. You can love dresses or hate them. You could love shopping ’til you drop or you could ove your brother’s hand-me-down t-shirts. You could love Teenage Mutant Ninja Turtles or Princess Diaries. You can have red, black, blonde, brown or grey hair AND still be a princess!

There’s something very wrong with the picture of a princess whose mere value is to have a pretty face and wait for her prince. We must be women who teach our daughters the positional authority and responsibilities of a princess. But make no mistake about it: our Prince will come and he’ll be riding on a white horse.

1 Now I saw heaven opened, and behold, a white horse. And He who sat on himwas called Faithful and True, and in righteousness He judges and makes war.12 His eyes were like a flame of fire, and on His head were many crowns. He had[a]a name written that no one knew except Himself. 13 He was clothed with a robe dipped in blood, and His name is called The Word of God. 14 And the armies in heaven, clothed in fine linen, white and clean,[b] followed Him on white horses.15 Now out of His mouth goes a sharp[c] sword, that with it He should strike the nations. And He Himself will rule them with a rod of iron. He Himself treads the winepress of the fierceness and wrath of Almighty God. 16 And He has on His robe and on His thigh a name written:

KING OF KINGS AND
LORD OF LORDS.

As we walk through all this dialogue about princess culture, let’s be sure to learn from it and fight with those who seek the best for our daughters. But take care not to throw the baby out with the bath water. (Or in this case, Rapunzel out with her hair.)

(a) The italicized words above are taken from the script for the Secret Keeper Girl Purple Party Tour, debuting August 2016. It has been my burden that we have introduced a harmful definition of princess to our daughter. The Purple Party will seek to present biblical truth to your tween daughter on what it means to be positionally a princess in the family of the King of Kings. Come worship our King with us in more than 40 cities this fall.

Written By
Dannah
More from Dannah
Take a breath. Slow down. Dating doesn’t have to be so...
Read More