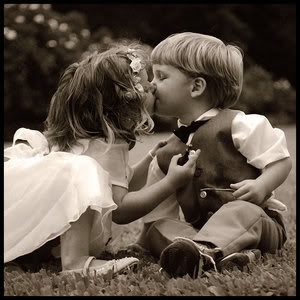 Ask little boys and little girls about each other, and you’re sure to hear some crazy ideas about love. Take, for example, these true thoughts on kissing:

You learn [how to kiss] right on the spot when the gooshy feelings get the best of you. –Doug, age 7

I know one reason kissing was created. It makes you feel warm all over, and they didn’t always have electric heat or fireplaces or even stoves in their houses. –Gina, age 8

The rules goes like this: If you kiss someone, then you should marry her and have kids with her. It’s the right thing to do.  –Howard, age 8

Never kiss in front of other people. It’s a big embarrassing thing if anybody sees you. But if nobody sees you, I might be willing to try it with a handsome boy, but just for a few hours. –Kally, age 9

How naive our young minds can be about love. But, on the other hand, at least these kids recognize that girls like to kiss boys and vice versa. Sadly, as we grew up, many of us forgot why girls are girls and boys are boys and why they sometimes like to kiss. Let’s go back to the Garden of Eden.

“In the beginning God created” (Genesis 1:1). Distinct in this creation were Adam and Eve. the pinnacle of god’s design, they were created to represent something greater.

Then God said, “Let Us make man in Our image, according to Our likeness…” So God created man in His own image; in the image of God he created him; male and female He created them. –Genesis 1:26-27, NKJV

We–male and female–are the image or likeness of God. Why doesn’t God mention the traits of being intelligent or worshipful or creative when He says we were created in His image? Why doesn’t He commend our language proficiency or our ability to compose sonnets? Apparently these are not the only things that make us a representation of Gods image. And perhaps they aren’t the most important qualities. Maybe there’s one that trumps the rest. The Bible mentions only gender in reference to our divine design. Maleness. Femaleness.

Why? Because the one true God is a social being. This nature is clearly seen in the Trinity. God the Father, God the Son, and God the Holy Spirit–though distinctly separate–exist together in perfect and constant communion with one another. And the unique distinction between maleness and femaleness invites us to be social beings too. Our male and female differences are what create our craving for yada. We wouldn’t long to be known if we were all alike, right? The experience of being known means we start at a place of being unknown. This places authentic humanity and sexuality at the context of male and female diversity.

To respond to the confusing gender messages around us, we have to go back to the beginning and ask, what is human? The secular sexual worldview declares that to be human is to be an animal and, therefore, we can follow any physical or instinctual urges we might have. But a biblical worldview tells us that to be human is to be–as a distinct female or male–the image of God. His “statue.” When people look at us, they see Him.

That’s pretty holy. Any other view of gender is little more than one of the villain’s battlegrounds for eliminating our belief in the existence of God. Everywhere I go, it seems, I am inundated with posters and ads celebrating diversity. But I rarely find a celebration of the diversity found in maleness and femaleness. Why isn’t that worth celebration?

All of this diversity between male and female is necessary to oneness. The human capacity for true oneness between two people is directly related to each person’s degree of differentiation from the other. the differences enable us to emotionally, physically, and functionally fit into and complete one another . . . [and] when they come together, they are one, or in the Hebrew, echad.

For this reason a man will leave his father and mother and be united to his wife and become one [echad] flesh. -Genesis 2:24

The Hebrew word echad–used here to describe the connection between distinct maleness and femaleness–echoes the greater unity represented within marriage. An ancient Jewish prayer found in the book of Deuteronomy cries out,

Hear, O Israel: The Lord our God, the Lord is one [echad] -Deuteronomy 6:4

You see, God is distinctly three (Father, Son, Spirit), and yet in divine communion He is echad. Bob and I are distinctly two but when we are joined together and in fellowship with each other and God, we are echad. I believe God chose maleness and femaleness as His likeness because He is a relational being. Coming together makes us echad.

Excerpt taken from What Are You Waiting For: The One Things No One Ever Tells You About Sex

Written By
Dannah
More from Dannah
A young girl enrolled in a Christian middle school gave voice to...
Read More