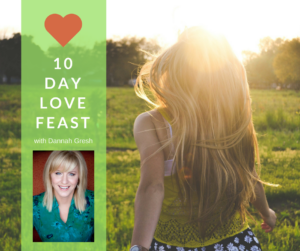 Welcome to the Get Lost Online Love Feast designed to help you feast on the love of God for ten days in an effort to overcome the angst of craving a guy!

Each day I’ll post worship music to focus your heart, a key Bible verse, and a prayer to pray just prior to a short devotional that’ll bring your heart to the banqueting table of God for a fulfilling and relevant teaching on what your heart truly craves! (Each of these is an excerpt from a love feast chapter in Get Lost: A Girl’s Guide To True Love where you can have the full experience. )

Every feel like just quitting? Like the work before you is too  hard? Guess what? It is. BUT GOD has given you His Spirit and His Strength. Let’s learn how to tap into it today.

Focus your heart in worship by listening to this song:

Lord, You are here. You are the Mighty One who can save me today. Rejoice over me. Quiet my heart with Your love. Lift me up with Your own voice singing over me. (Adapted from Zephaniah 3:17)

A few weeks ago I came home to find our peahen, Roxie, honking her little head off at my back door. She had been missing for a few days, so I was thrilled to see her and immediately tossed a few blueberries to her. Normally, she’d stay and eat as long as I offered food, but on this day she gobbled up four or five berries and ran off into the woods as fast as her slender bird legs could carry her.

I followed, eager to see where she was headed.

I found Roxie sitting on a nest of eggs, pretty much out in the open where any of the local foxes, hawks, or bobcats could snag a peahen snack. While she had no idea of the risk, I did. She was not strong enough for the situation she’d put herself in. And I needed to do something about it.

That night we launched Project Relocation. Bob and I prepared her pen, and I was elected to capture Roxie and carry her to safety. There was no way she was going to like this. Our peacock, Alexander the Gresh, and peahen enjoy interacting with us—as long as we don’t touch them. I had to be fast and strong. But I also had to be gentle. If I held her just the wrong way or too tightly, I’d risk breaking the frail bones in her wings.

I grabbed Roxie in a single flurry of movement. I had no intention of harming her, so if she’d really fought, I’d have had to let go. But then she’d return to the place I was certain would mean her death. So as she fought to escape, I held her firmly yet gently.

And then Roxie made a choice.

She stopped trying to wriggle out of my grip.

She stilled her body. She submitted to my plan.

She was safely—if not happily—relocated to the peacock pen. I’m happy to report that Project Relocation was a success. One of those eggs is now a sassy peacock named Napoleon whose story my Secret Keeper Girl tour team tells each night from stage.

The scene makes me realize that there’s only one reason God’s strength would fail to protect me: if I wriggle out of the safety of His grip.

And I think we are prone to do that.

It is impossible to defend ourselves against the enemy when we make up our own strategies, but these are the natural tendencies of a girl who is focused on herself rather than lost in God. Our me-centered world is obsessed with exerting our own strength rather than relying on the strength of God.

We can’t get lost in His strength when we’re relying on our own.

How’s this for an antidote to our self-made plans and solutions:

And then he told me,

My grace is enough; it’s all you need.

My strength comes into its own in your weakness.

Once I heard that, I was glad to let it happen. I quit focusing on the handicap and began appreciating the gift. It was a case of Christ’s strength moving in on my weakness. Now I take limitations in stride, and with good cheer, these limitations that cut me down to size—abuse, accidents, opposition, bad breaks. I just let Christ take over! And so the weaker I get, the stronger I become.” (2 Corinthians 12:9–10, msg, emphasis added)

Are you sick? Let Christ take over and trust Him, whether or not He heals you.

Are you failing math? (I failed elementary math—as a sophomore in college—and it redirected me out of the classroom and into your life through books.) Ask God to help you to do your best and trust Him even if you don’t make the grade!

Are you filled with anger at a friend’s betrayal? Let Him take over, for sure. Your plans to fix it aren’t going to work.

Are you a boy-crazy girl without a boy? Meditate on the truth that He is enough.

It requires stillness to let Him take over. You have to stop moving in your own power, be still, and rest in His strength.

Be still, and know that I am God.

But he had a problem.

Everywhere he looked, he saw Philistines. Lots of them. Scattered throughout the Valley of Rephaim. And they wanted to kill him.

Thankfully, he was a man after God’s own heart (1 Samuel 13:14). As such, he loved the Lord and knew how to rely on God’s strength. The first time the Philistines came, David ran to the Lord and asked if he should fight them.

And he gave God all the credit: “The Lord has broken through my enemies before me like a breaking flood” (2 Samuel 5:20). David fought the battle here on this earth, but he knew that his own efforts were of little value. It was God’s strength that broke through his enemies.

But they came back, as Philistines sometimes do. (Ever find yourself fighting the same battle over and over? Sometimes God just wants to see if we’ll continue relying on His strength.)

Again David ran to the Lord and asked if he should fight them.

The Lord told him it wasn’t time yet. He said, “Go around to their rear, and come against them opposite the balsam trees. And when you hear the sound of marching in the tops of the balsam trees, then rouse yourself for then the Lord has gone out before you to strike down the army of the Philistines” (2 Samuel 5:23–24).

David went behind the Philistines.

The world was quiet. Peaceful.

His blood ran cold. There it was just as God promised: the sound of marching in the tops of the trees. Angels? God Himself? Whatever the answer, David’s soul followed hard after God in obedience that day. Charge!

David did eventually have to move to make things happen, but it was in God’s time and on God’s terms. He won another battle because he relied on the Lord’s strength and not his own. He was still in His hands.

God’s purposes for you can be trusted. Stop trying to wriggle out of His hand. The circumstances He’s given to you are not too much for Him. Get lost in His strength. His tender care will never fail.

Relax in His Grip

Simply be still. No wriggling, no wrestling. While you’re resting there, be thankful for your weakness, because it’s the very place His strength will manifest. How do you think a teenage girl broken by sexual sin grew into the author whose name is on the cover of multiple books about purity? (That would be me!) It wasn’t until I stopped trying to be my own healer and my own strength and let Christ take over that I finally began to change from broken to beautifully strong. His strength healed me and moved into the weakest part of my life—my impurity—to transform it into a breathtaking strength. I’ve lived this one out, girl. I know what I’m talking about. Trust me. He can use any weakness—even those created by your own sinful choices—to manifest His great strength!

Take some time today to let Christ take over. Like David’s uselessness in fighting the Philistines, or my hopelessness to heal my broken heart, I’ll bet there’s an area of life where you feel literally helpless. Admit your weakness. Reach out for His strength. You’ll find Him ready and able to take care of you. In your journal today, write down any specific problems or weaknesses you are facing and ask Christ to take over! Then spend a little time just being still—like David under the trees. Practice the art of listening for God’s movement.

For a talk-show meet’s video-style video of me and some of my favorite girls talking about today’s Love Feast, watch this video.

This is a partial excerpt of Get Lost: A Girl’s Guide To True Love (Chapter 11). I’m happy to provide this as a gift as you join us for the ten day love feast. For the full text of Day Five of the Love Feast, you need a copy of Get Lost.

Written By
Blake
More from Blake
Cedarville University, Dannah’s alma mater, has stepped up to sponsor this season’s...
Read More