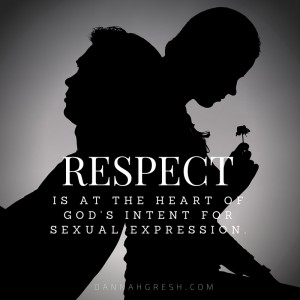 Respect is at the heart of God’s intention for sexual expression. Lean in while I unveil to you one of the best-kept secrets in the Bible: a single word. The Hebrew word for sex. The Old Testament uses the word yada for sex. It means “to know, to be known, to be deeply respected.”

God’s very definition of sex transcends the physical act and emphasizes emotional knowing and an exchange of respect. Respect of others, and even of ourselves, requires self-control. This is one, though not the only reason, that our sexual lives must be characterized by self-control.

Morality aside, sex thrives in an atmosphere of control and respect. A study referenced in Sex in America found those having both the hottest and most frequent sex were not college co-eds with a variety of sexual partners but middle-aged people who embraced mutual lifetime monogamy out of respect for themselves and their partners. Another study concluded having more partners in their lifetime actually predicted less sexual satisfaction for men. Sexual self-control makes sense for both moral and practical reasons. You wanna have a great sex life? It’s got to begin with self-control.

This self control begins with the delicate power of modesty.

For fifteen years, I have taught that the deepest sexual beauty of a woman is for just one man, as opposed to many. At times this has been taken out of context as if the purpose of her sexual beauty is to both attract and please a man. That is not true and I’ve never said it. But it gets implied when you pick and choose what you want to hear.

Today, I’d like to begin to set the record straight by clearing up four myths about modesty. We’ll tackle one per week for the next four weeks.

Myth #1: The modesty movement forbids the expression of feminine beauty.

I have two Barbies in my office. The American Barbie wears very little, making sure to show off her breast, belly and legs.

The other, a Muslim Barbie named Fulla, is dressed in a burqa. The only flesh you can see surrounds her eyes. 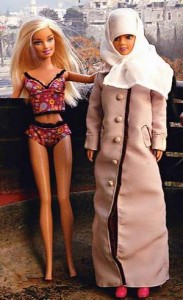 These dolls create the same end result: a hyper-focused obsession on female sexuality. Both raise awareness of a woman’s sexual nature and reduce her to being a mere body.

In some Christian settings, women might as well wear burqas. In those settings where the female body is hidden in shame, men seem uncomfortable. I do not find this same sense of discomfort in environments where women demonstrate a healthy expression of their feminine beauty.

Last year I spent some time in the Dominican Republic where the Christian brothers and sisters kiss! Every time they greet each other, it’s with a kiss on the cheek. The first few times a pastor or other church leader moved in on me…well, I will tell you I was quite uncertain as to what to do? But then, I saw that the Christian culture of modesty wasn’t laced with repression of or hyperawareness of sexuality that we sometimes experience here in America. It was a natural, innocent, beautiful, and familial expression and something I wish we did experience in my own culture more comfortably.

A healthy message of modesty can allow—and in fact, encourage—women to celebrate their beauty. And if the men want to celebrate along with us…who am I to stop them? After all, FIVE TIMES in the New Testament Christians are told to “greet each other with a holy kiss.”

If you’ve been believing the lie that teaching modesty means we can’t have women who express their beauty, you have believed a lie. There is a much better truth to unravel.

TRUTH: We must teach women to celebrate their beauty while we teach them the self-control of modesty, enabling them to embrace self-respect free of hyper-focus on their bodies.

Do you think that we have a long way to go to achieve that in your Christian community?  What can we work on? How can I communicate this as a leader? How can you? I’d love to hear your ideas in the comments below. I’m giving away a free copy of my Cedarville University edition And the Bride Wore White to ten randomly selected people who leave comments below. Answer one of the questions above below to be entered to win. Winners selected Monday January 18th.

Interested in more intelligent faith conversations on the topics of love, guys, and God? I’m on tour in February. I hope you’ll come spend an evening with me and Copperlily. Learn more here.

More on Barbie and Fulla in this video below originally delivered at my alma mater Cedarville University.

Join me next week at this blog when we unravel the myth that teaching modesty promotes rape culture and is a form of misogyny.