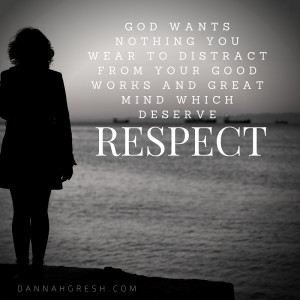 Is Christian culture sometimes formed more by secular lines of thinking than by biblical truth. Third wave feminism has posited the thought that teaching purity and modesty is a form of misogyny BECAUSE it is largely directed at women. They have even gone on the record that teaching modesty promotes rape culture. Does teaching modesty promote “rape culture”? A better question to begin with is this: does “rape culture” even exist?

Last year, a TIME Magazine article declared that it was “Time To End Rape Culture Hysteria.” Writer Caroline Kitchens championed the report of the nations leading anti-sexual violence organization, RAINN, which rebuked the overemphasis on the concept of “rape culture” as a means of preventing rape, citing that 90% of rapes on college campuses are committed by 3% of the male population. RAINN argues that rape is the product of individuals who have decided to disregard the overwhelming cultural messages that rape is wrong.

The fact is rape crime is on the decline. The National Crime Victimization Survey indicates that rape occurrence in the 1980’s was 2.4 per 1000 people. Now it is .4 per 1000. Even RAINN reports that sexual assault has fallen by more than 50% in recent years. That makes it no less vile, but it does mean we aren’t living in a rape culture.

The “modesty promotes rape culture” idea is a feminist dogma. It is scripture that should be informing the Christian conversation on sexuality, modesty, purity, and sex crimes; not the leading voices of third wave feminism.

There’s nothing wrong with teaching Christian young women that God wants nothing they wear to distract from the good works they do and the great minds God’s given to them so that they can be respected. In fact, from a biblical perspective it’s very right. AND…God directs the teaching at women.

The Scriptures only address modesty directly four times. I Peter 3:3,4 and I Timothy 2:9,10 are the hallmark verses and these God-breathed scriptures are addressed to women.

“I want women to be modest in their appearance. They should wear decent and appropriate clothing and not draw attention to themselves by the way they fix their hair or by wearing gold or pearls or expensive clothing. For women who claim to be devoted to God should make themselves attractive by the good things they do.” I Timothy 2:9,10 (NLT)

If God’s Spirit inspired writers to direct teaching on modesty specifically to women, it was for a reason. I think I know why. The beauty of women is simply more powerful than that of men. When an indifferent columnist criticized my efforts to teach modesty, she wrote:

“…the underlying assumption …..to endorse is that the female body, if not bad, is at least overwhelmingly tempting and tantalizing…“

With all due respect, the female body is tempting and tantalizing. God created women to be especially beautiful. Why do they use women’s faces to sell men’s razors? Why was the Grammy awards modest standards focused on female body parts? Why don’t men wear belly shirts? (Forgive us, God, for the eighties!) Because female beauty is a powerful force. Advertising gurus have discovered that if you put the photo of a woman in an ad, you can increase the length of time someone spends looking at it by as much as 30%! It doesn’t quite work that way when you use a photo of a man.

“May your fountain be blessed and may you rejoice in the wife of your youth. A loving doe, a graceful deer—may her breasts satisfy you always, may you be ever captivated by her love.” Proverbs 5:18,19

That’s a steamy verse. A more literal version of the last phrase might be, “may you be intoxicated by her sexuality.” The female body is powerfully tempting and tantalizing and in the context of marriage this is a wonderful thing. This is why God’s word addresses teaching on modesty towards women who hold that power and must exercise self-control and respect when they express their beauty.

TRUTH: Teaching on modesty is primarily addressed to women in the Scriptures and that is why we teach it primarily to women…and because we’re just so much cuter than men. (Smile.)

Interested in more intelligent faith conversations on the topics of love, guys, and God? I’m on tour in February. I hope you’ll come spend an evening with me and Copperlily. Learn more here.

More on “Does modesty promote rape culture?” in this video below originally delivered at my alma mater Cedarville University.

Join me next week at this blog when we unravel the myth that men are off the hook when it comes to modesty.

Written By
Dannah
More from Dannah
Dear mothers of the world, my heart is pleading with God for...
Read More