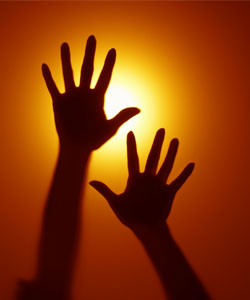 It’s the strangest sex fact ever…and I have quite a collection after twelve years of studying human sexuality. But none like this one. And it strangely supports my devotion to defend the intimacy of marriage as a picture of the relationship God desires to have with mankind. (Wasn’t that a safe and pretty sentence that I just wrote?) “Intimacy of marriage” is so much easier for us all to meditate on. It’s not terribly blunt and we can get by with not directly connecting sex and God. But the concept here really is that holy sex between a husband and wife somehow has potential to parallel the passion and intimacy we can have with God. (Yee-ouch! I never said it quite like that.)

“Yada.” This is God’s word for sex. “Adam knew (yada) Eve and she became pregnant and gave birth.”

Yada is also his word for knowing Him. “Be still and know (yada) that I am God.” In my heart I know that the wedding ceremony, paying the bills together, and taking long walks as a married couple are a part of “yada,” and therefore a part of the picture of our relationship with God, but…it’s pretty clear what Adam and Eve were up to when this word was used. The act of shameless, naked one-ness is the place where God choses to plant this word. I admit, even after twelve years of studying the concept it is still hard to grasp. How can a simple physical act—and one that’s misused and distorted every day—contain a picture for us that helps us “get” God? How can it be like communing with Him?

I’m about to introduce you to the strangest connection between sex and worship. If this blog wasn’t already controversial, I’m about to bring up the topic of “speaking in tongues.” Thankfully, I have science to back me up on this one. (You might want to sit down right about now.)

There’s interesting new science about religion and the brain. Discover magazine reported on this in a 2009 article entitled “The God Experiment.”* Andrew Newberg, a nueroscientist at the University of Pennsylvania, has studied what is happening in the brain when someone experience a sense of closeness to God. Short layman’s version: when we experience a truly deep connection to God in meditation, prayer, or worship activity increases in the front of our brain (pre-frontal cortex) and an area in the top rear of the brain (posterior superior parietal lobe) shows a decrease. This is what connecting with God looks like to science!

Ok, here’s where it gets strange: In his studies of Pentecostal Christians, Newberg found an “even stronger connection between decreased activity in the orientation-association region and religious experience. He found that when Pentecostals begin speaking in tongues, two things happen in the brain: Posterior superior parietal lobe activity decreases, and the frontal lobes nearly shut down as well. The worshipers seem to lose their sense of self completely in religious rapture.” Ironically, the frontal lobe that shuts down is one of the significant parts that control speech but it does not function when someone speaks in tongues. At this point of discovery, I was intrigued by that fact alone but was about to have my own brain thrown into a tailspin of worship and wonder.

“Intriguingly, Newberg has found some similarities between the neural activity of self-transcendence and of sexual pleasure.” The authors words. Not mine. What he was saying is that when you’re looking at a brain functioning, it’s hard to tell the difference between speaking in tongues and orgasm. They look kinda similar. The writer went on to say, “that may be why mystics such as St. Teresa so often employed romantic and even sexual language to describe their raptures.” Or, in my words, it may be that God created romance to help us understand why and how we are drawn to Him.

The connection between speaking in tongues and orgasm has been made by a man who, as far as I can tell, is not religiously active in any way. He’s simply intellectually curious. And he admits that the overlap isn’t total. The hypothalamus seems to play a larger role in orgasm, and the brains frontal lobes seem to be more significant during spiritual practices. None-the-less, there’s something physical here that links the world of sex to how we relate to God.

I realize that speaking in tongues is highly controversial. (Gee, didn’t Paul say something about not arguing this one out?) If you believe in this gift, this post will be something of beauty to you. If you don’t, it could be something to offend you. Either way, I plead with you to simple look at this fact: there’s a physiological similarity between how we commune with God on an intimate level and how we commune with our spouse in the bedroom. As my friend Kim said when I mentioned this research: “Spirit speaks to spirit!” In our deepest times of prayer, our spirits take flight and commune deeply with God’s Spirit. In our deepest moments of physical intimacy, could it be that spirit is communing with spirit?

*John Horgan, “The God Experiment:Five brain scientists try to answer one of the oldest questions on earth-What do we know when we know God?” Discover presents The Brain, Fall 2009, page 12-17. I found that some of these scientists seem to be wanting to explain God away by their research. They want to equate our religious experiences with simple activity in the brain that “feels” like God. Instead, I look at it through the lense that God is allowing us to sense him through a stimulation to the brain. My question is always “What is causing those things to happen in the brain? What’s the stimuli?” I believe it is God. All quotes in this blog are from this article.

Written By
Dannah
More from Dannah
Recently, I spoke at Grove City College chapel and had the delight...
Read More